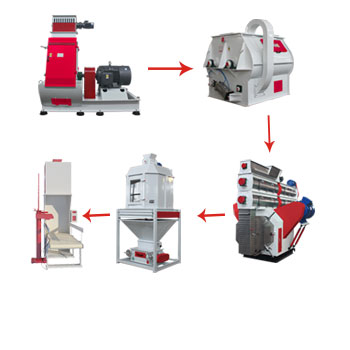 Materials to be crushed

> Thinner: Calcium carbonate such as shell powder and stone powder.

> Trace salts: such as cobalt carbonate, calcium iodate, sodium selenite and the like.

Mixing process can be divided into batch mixing and continuous mixing two batch mixing is a mixture of various components according to the formula ratio of mixed together, and put them into batch mixer in batches of the periodical work mix machine, the hybrid method to change the formula is more convenient, mixed between each batch is less, is a kind of hybrid technology, now in general use open-close operation more frequently,

However, when changing the formula, the flow adjustment is more troublesome and there are more material residues in the continuous conveying and continuous mixing equipment, so the problem of mixing between the two batches of feed is more serious.

(1) ring die pelletizing: conditioning homogeneous material magnet to mixed by security first, and then were evenly distributed between the transverse pressure mixture, such material by feeding area compaction area into the extrusion area, by continuous extrusion press roller clamp into the die opening points, the formation of columnar feed, with die rotation, are fixed to the outside of the die cutting knife cut into shape between material.

Access to cooling in the granulating process due to high temperature and high wet steam material be squeezed to produce a large amount of heat at the same time, makes the grain feed just came out from the granulator, the moisture content of 16% to 18%, the temperature as high as 75 ℃ to 85 ℃, under these conditions, granule feedstuff easy deformation and broken, also the storage will produce bonding and mildew phenomenon, must make the moisture below 14%. The temperature drops below 8C above air temperature, which requires cooling.

We receive enquiries in English, Español (Spanish), Русский язык (Russian), Français (French) and العربية (Arabic). Our professional team will reply to you within one business day. Please feel FREE to contact us!